Despotism and Happiness: Two Sides of a Coin. 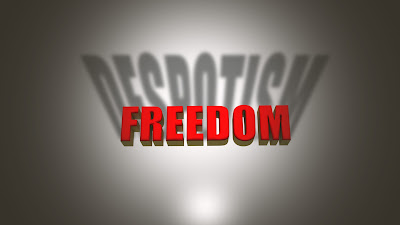 I like to make it clear this piece is non-political and non-religious and harbours no critical intentions of any religion.  Its only message is that of the Arab world and its people, Both, Muslim and Christian, not ready for Democracy or universal Freedom but in fact, the majority of its inhabitants are adverse to the idea of Parliamentary Democracy.  Their interpretation of liberty is freedom FROM and not freedom TO - by and large a negative freedom.  They prefer to be free from political entanglement preferring not taking part in the system of government.  Their profound and obscure belief is sustained by ideas to better leave politics to those who rule.  This leaves them to indulge in a daily diet of Cafe politics, trade and money-making.

This essay comes from a westernised, regenerated and redefined fellow Arab I will attempt to show the peculiarities often seem to an untrained eye a dichotomy that can exist in Arab window framing when grappling to understand or to join with Liberalism.  Arab leaders and people have on the whole over the centuries ruled so keeping hold of an archaic system where they feel happiest is more favoured than stepping into the unknown.  Despotism in the Arab world is inherited from Ottoman Despotism, brushing aside any other form of rule is natural.  Cosying up to some of the worst violators of human rights in the region, such as President Sisi of Egypt is one example.  The idea of sharing with a government is an anathema to their way of thinking. Jean Jacques Rousseau would be spinning in his grave while Voltaire would have despaired.  As for what Montesquieu would have made of this, I shudder to think.

Anyway, it all comes down I suppose to universalities.  Western universalism Islamic universalism Asian universalism all are vying for universal value.  Falling into line is a preferred option but looking at a social contract with disdain has thus weakened any ideas to emerge from the darkness of that authoritarian cave.  Remaining subjects in preference to seeing the light to be individual citizens. They find it more convenient to entrench in the old world order than to navigate the conduits of enfranchisement of liberality.  The upending cultural frame of mind that had taken centuries to embed is a struggle and remains outside the framework of resistance that has in any case, over this period become rusty.  Or it is simply happiness in a different universal sphere where tough talk, a Clint Eastwood approach in preference to Reason that "make my day" for them.

The French Revolution inspired by the notions of the Enlightenment that came to the fore grabbed Europe's attention in 1760's was by western standards an intellectual revolution that is still in progress.  Driven by Reason and rational enquiry its ultimate goal was to the happiness of the individual. Invariably, finding in its mission towards values, attitudes and beliefs inducing a culture of empiricism; to question and to reason. Challenging the status quo, why and what became one of the modernities of the age.  France in July 1789 began a process of emancipation from a society of orders to one that belonged to the people that went on to define a Nation.  A citizen's Rights was born from the seeds of absolutism- grabbing a mistake in the genealogy of evolutionary government heavily centred at the time on the nobility and patriarchy.

The recent struggles on the road to Democracy belie the nature of Islamic universalism.  In this vein, 'The Arab Spring' was an attempt to see the light in the emancipation of the individual for it to cultivate the seeds of Democracy and Liberalism.  The movements faltered and went horribly wrong as we saw in Egypt, Libya, Iraq, Syria, Yemen, Tunis among other Arab countries.

As I see it, in theory, Arab people are some of the most politicised people, but in practice, most are inclined to accept the inevitable. There is often a misconception of ideas between Rule and Govern.   The difference, of course, Rule commands obedience by a show of strength,  and power. Whereas to Govern strength is entrusted to personality, consultation and acceptance since by western standard justification for a majority to sanction any Rule of Law.  Without consultation, laws remain arbitrary; there can never be synergies between the two.  Moreover, in western thinking societies, Public opinion is an important pointer to people's metrics of satisfaction.  Somehow Arabia has its politics in reverse it is where the people are answerable to the government and not the other way round and where one is assumed guilty before innocent. Laws bind the people; religion controls them, while a government is lacking in virtue, govern by propaganda, yet they acquiesce to all three and luxuriate in the delusion they are Free.

However, to stay on this point a little, the logic of Freedom is to know what it is one is free from and free to do what.  The ruling groups fail to provide a compelling indication or direction to those ends. Monarchs, Emirs and Princes stay in power on the strength of so-called utilitarian principles that they install mainly materialist, leisure and shopping malls with instructions how to enjoy.  Whatever rights given under the Constitution bear little relevance since they are limited by Laws that are subjected to religious ethics dating back to medieval time.   An enlightened view, like that in West, the treatment of International citizens, is that the European welcome is unconditional. You are welcome to join us and be like us, and you are welcome to join us and not be like us.  If one looks at the constitutions of most Arab countries as I have done, I found their laws enshrined in Sharia principles, and the welcome is conditional and only seemingly tolerant but overlapped and consistently remaining subject and unequivocally subservient to such legislation that embodies it.  Such has become the culture and Arab diaspora to the West proved no guarantee against such thinking since culture has naturally followed.

At a stroke, the UAE government, in a recent example, disbanded what took it years to build: limiting freedom of speech.  Despite the fact, all Emirates are the signatory to the International Laws of Human rights, nevertheless these signatures overridden by the law of the land.    By making it against the law to show or express sympathy towards Qatar or Qatari is wiping away the freedom of conscious as well as free speech.  Breaking these rules or questioning their values, intentionally or innocently, one could face a stiff jail sentence.  This is clear evidence of an ostensible show of democracy tolerated not the freedom of Democracy.  Themes of Critical thinking is not only about commas and semicolons but about phraseology and the linking of words to obliterate or emancipate meanings.   Ambiguity and equivocality can never lend much to modernising idioms for further understanding, moderation or toleration.  Sharia laws may allow you to have fun but by its terms and parameters are set for that end. These are a spiritually inspired monolithic statement, not for Man to moderate, reform or change.


Subject to the rule of law that originates from a bicameral system of government and laws synthesised from a system of checks and balances is a rare commodity and are viewed by many as slow, tedious and boring.  Arabs prefer their rulers like a new CEO walking for the first time into a hostile boardroom; he set the tone: a one man Government is laying out the rules of the game and won’t tolerate disobedience.  They issue warning they would not tolerate a  "hostile media" — a likely reference to programming on the Qatar-owned Al Jazeera network. 'No one allowed to doubt my word or my way of thinking, I have no deficiencies, and I know the best' - is a syndrome ever present.  In typical Arab fashion and hot-headedness, they looked at criticism, not as challenges but defiance and where objections by Human Rights Watch and Amnesty International ignored. The thought there could be another way - a third way is often an admission of failure and hurt pride.  As for Freedom to chose a government, well, that remains taboo and is strictly forbidden.

Today's chess board dominated by the country with the biggest oil reserves, and the new man in line to rule the Saudi kingdom will have Iraq in his sights having nominated for the alienation of both Shiaism and Shia Iran is a priority.  Emboldened by the United States, Saudi hegemony, with Sunnism and Arabism as the carapace, is unleashing its petro-muscle for mastery on all it surveys forcing its will on the minnows.  The likely outcome is a war of Kings jostling for the highest stakes.  The ultimate prize is the dominance of the Middle East without a say of its people since as always they are the pawns, obedient servants submissively accept whatever consequences thrown at them. Sunni Arab Nationalism is on the Warpath where Shia Iran and its sympathisers have no say, and any dissent might just as well bury their heads in the sand dunes.

Jailing Democrats is one of the favourite pastimes especially when it come to members of The Muslim Brotherhood. A liberal mind that can underscore the power of the individual could be a serious misdemeanour; instead, conformity is the order, and that is an order.  An independent mind comes with a heavy baggage as an enemy of the state and frowned upon as an undesirable attribute.  Independent thinking especially in political arenas or as cultural dissonance is taken as subversive and quite likely to meet by a stint in jail ripe for remodelling. Foreigners face stiffer sentences at the end of which they are deported as unwanted goods.  Religious Dissenters, in the land of Emirs, or heaven forbid Atheists, on the other hand, could face lashes or execution.  One can rightly ask has Universalism gone bonkers? When society is looked at through the prism of logic to understand that democracy is based on Reason while despotism relies on fear, the answer is who cares. As long as people are happy Reason fears to tread.