A Time to Hope

In the light of current political turmoil in the Middle East, the most attention grabber has been the speculation whether the policy of Israeli government towards its Palestinian population is about to take a turn of no return.  It is about to vote for the annexation of the West Bank, a clear sign it does not give a toss about international rules of conduct which deems such action illegal.  Nevertheless, what will emerge in the days to come is that annexation will indeed become a fact of life and objection to it would be a thing of the past.  Arab objections would be mere lip service as was the case when America moved its embassy to Jerusalem.  All of this means Israel confirms to the world that the UN-sponsored rule-based international order is defunct and meaningless.  Recognising Israel's power and influence in the world, which incidentally far exceeds its size, a new approach to peace negotiation is needed.

But annexation is nothing new.  Since 1967 Israel's Prime Ministers have countenanced the systemic spread of settlements over the West Bank.  The difference now is that Benjamin Netanyahu the present Prime Minister is overt in his unabashed arrogance, backed by unequivocal support from the American administration, is flouting international laws by advocating annexation.

Some would argue annexation spells an end to any hope for peace between the Palestinians and Israel in the future.  It could also mean the corraling of the Palestinian population into clusters of occupations attracting the attention and accusation of an Apartheid system.  Thirdly, an inescapable option; Israel to naturalise all those Palestinians fall under its wing. Such a course of action would be self-defeating in the long run as eventually, the Arab population can outvote an incumbent government.

If the last option becomes an inevitable choice, it would be the Palestinians the majority of whom are Muslim become Subjects of a Jewish state. Could be anathema for many Muslims.  But still, that would bring them into line with Christians living in the neighbouring Arab Muslim countries. Christians have been doing just that since the turn of the Twentieth Century.  Every Arab country, except for Syria, has its constitution enshrined by Islam. The proclamation is that Islam is the religion of the State.  Which means in cases where adjudication required the teaching of the Koran, and its interpretation would hold sway.  In Israel's case, despite what it says on the cover a 'Jewish State', it purports to lives by secular Liberal democracy.

Enough talk of annexation, apartheid, and occupation and let us rewind a little and use this occasion a turning point in establishing a new peace accord. 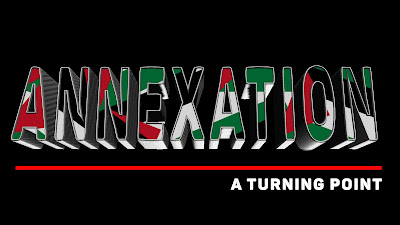 According to Jean-Paul Sartre, an eminent French Philosopher, his theory of existentialism is embedded in the idea that "existence precedes essence".  Only by existing and acting a certain way do we give meaning to our lives. The people of Palestine should carry this mantle of wise philosophical approach.  To widen their hope and broaden their vision towards a new future.

Recent history and blight of the Palestinian people

Since the Nakba of 1948 life has stood still for them.  The myth of winning world opinion to their cause by continued dependence on world charities has only entrenched many of them in continued misery, being there and meaningless.  The poignant belief that such manifestation of victimhood will bring back the past to its mythical glory is nothing less than political manipulation by those who stand to benefit.   Such a purposeful and imposed objectives for the continued blight of people allow the Palestinian leadership to enjoy perks and economic opulence.  So they ensure to remain in the political limelight for whatever other advantages that could bring.

To structure world opinion by the Intfadas that followed the initial diaspora, or to scaffold world morality or sympathies with nothing to offer but impoverishment have clearly not worked.  Many living in Gaza today have remained uneducated firmly entrenched in myths and misery. A show that testifies to the absurdity of the human condition, their only escape route is their irrationality.  They continue to find a reason to hope in what impoverishes them. Still embroiled in that one ideological stance unknowingly grouped and used as a bargaining ploy- innocents in a desert of desolation—time to look for a new horizon.

But first, the world has to stop the widespread belief that siding with the Palestinians is a left-wing ideology.  The cause has to transgress beyond this almost single share of value.  Just as Black lives matter, share their values with white people, the discrimination they face pales into insignificance compared to daily atrocities, the Palestinian people undergo.  Establishing shared values in human life, civil and human rights with the world at large.  "I can't breath", is a scream for help but in Palestinian hands has always remained merely an echo in the hollow chambers of world opinion.  Nobody, not even the Arab world there to circle their wagons against injustice. The Palestinian people in Gaza and occupied lands have been drained of hope, the alternative to turn to the next phase.

The geriatric Palestinian leadership have been inept at dramatising the suffering and the existential threats of its people.  But, finding itself deep in troubled waters, and currently swimming against the tide, no harm to turn to a true cliche, it is never too late to attempt a reversal of fortune.  It is time to realise that Mahmoud Abbas and co. are facing a crisis.  The political situation is at a crossroad faced with difficult choices, divided when they are needed most.    The status quo thus far they have enjoyed can not be maintained.  Faced with a deteriorating situation to their leadership, coupled with an increasing loss of land since the Oslo agreement things need to come to ahead.  A change to a more active, energetic and innovative group is the only remaining hope for the Palestinian people to weave back their identity and their integrity.  In a world where scepticism has putrified their cause a thorough overhaul needed to claw back the expanse of their ideals.  A cohort of Palestinian intelligentsia is never far away talented enough to broaden this stagnant and myopic vision, world-renowned and influential. They can and are willing to offer their expertise for the purpose if only allowed a platform to engage and fit into the system.

So, what to do to widen this narrow scope. A new perspective to go beyond a pixelated eye view of things to bring these concerns to the fore of world opinion.  Fighting for justice and fighting for peace needs new blood a new declaration of intentions.  A new war of ideology and civic nationalism required to redefine the meaning of life of the Palestinian people.  To disarm the hatred, mistrust and suspicions of all concerned.  To spring out firm beliefs in new ideas pulling the cause forward to new frontiers.  Coming in peace is the new slogan and for many in the Middle East a modern philosophy.  A new bargaining concept needed to carry the Palestinian people to the elusive peace they so dearly deserve. To stop rehashing views of old but to start lifting the veil of ambiguity and suspicion.  To behave as people, not as victims.  And lastly, strange as it may seem, to debunk Netanyahu and Gantz hawkish philosophies and appeal directly to the Israeli people whos life does matter.

In liberal democratic states, more than ever before, the voice of the people that make the events governments follow.  Recent three appeals to the electorate in Israel is a case in point.  The hierarchy needed legitimacy and three elections in a row within a space of a few months is a prime example of electorate rule.  So make use of the system and start to make amends and not rash ideas of throwing people in the sea—a new beginning to create a new past for the future.

Anachronistic myths and propaganda are best left to history.

Time and again, myths and propaganda inadvertently scored their own goal.  Threatening language have also left a disfiguring scar on world opinion.  Videos of atrocities across the social media showing grievances in all sorts of their ugly forms have proved self-defeating.  At best they grab attention for no more than ten or twenty seconds they share.  Olive branches and white doves no longer constitute chapters for peace.  World interest can only lie in the scope and sincerity of intentions. In all of this, it is worth to bear in mind justice lies on the side of the underdog, so here justice will prevail, but knowing how to grab it to serve ideals, is an art form. Mao Tse Tung Long March was a retreat but won him victory.  So, time to learn a new approach and time to latch on to the modern world. Ideas are starting points and what may be an unpleasant truth annexation could be a turning point, the first step to peace and a time to hope.