The first signs of panic that Corona Virus or Covid-19 was coming when Toilet paper hoarding began trending.  And before any lockdowns supermarkets were running out of flour and pastry ingredients.  Channel 4 Bake off spurred other Television channels to capture the spike of TV viewing public who felt the need to compete in upcoming MasterChef finals.  Signals began to trigger odd signs; Corona generation is for a liberated woman to snap back to the Kitchen. Surely, can't be the case after a long struggle to escape the kitchen sink.  The UK government was all for washing hands and proclaiming we are in this together.  That sparked a buying spree of Bacterial soap by many people to sell at a profit which killed any ideas of solidarity. Shortages of masks, ventilators, hospital beds ensued. Soon enough we were learning a foreign language: Lockdown, social distancing, Wuhan, Covidiots and of course the difference between Pandemic and endemic.  Working from home became a fashion symbol and more in tune with social class awareness generally associated with higher-paid employees.  Using Zoom, a cloud platform for video and audio conferencing was about to take over our working habits. Others who could not work from home became key workers, the majority of whom are much lower paid but, we all cannot do without.

Within a couple of weeks following the World Health Organisation announcement confirming the Corona Virus is transmissible from human to human, formally announcing a pandemic, the world began to close down.  For protection against the disease, individual social distancing meant confinement at home. From an individual level soon, it caught on to country-level. European countries took on individual decisions to close their borders.   One wonders whether the Union in the European Union is a bonding of convenience merely veneer thick. On our TV screens, we are served a daily diet of gloom and doom, where the count of people dying took on a macabre interest.  Covid-19 was monopolising television news hours and most of the other tv hours.  How to deal with this novel disease became prioritised over all other TV scheduling overlapping government activities.  Dynamics of information fed a wall to wall coverage of News about hospital beds and securing hospital equipment, levelling the curve took on priority over everything else.  Hospital beds were at a premium. Not to overwhelm admissions of people suffering from the disease became a government priority, the Nightingale Hospital in East London, with 5000 beds hastily put together became a symbol of creative thinking and British manpower.

Fear of the unknown betrayed regular everyday habits.  Life, as we know it came to a standstill but we realised an inevitable change is on the horizon.  Closing down of society meant planes grounded, Airports silenced, roads emptied, public transport was running on empty, ferrying only the brave key workers continually exposed to this invisible enemy.  An altogether eerie feeling, walking in the centre of town, here in London, is like living in a vacuum.  The only consolation was the unpolluted roads meant a clean environment; people were breathing carbon-free air. Hotels closed their doors, and Cruise liners were kept at a distance from every port.  With shops ordered to close and others running out of business, online shopping meant Amazon was taking over our retail habits on the way to making its owner the first trillionaire.  Search engines on the internet, as well as our smartphones monitoring our movements and patterns, configuring our data.  Making us the science of tomorrow, shaping our digital footprint to study to make available for numerical analyses in this information age; mining extractivism for the digital industry.  Anonymous statistic from a gathering system of unauthorised virtual surveillance beginning to resemble a monitored society we are docile enough happy to accept. 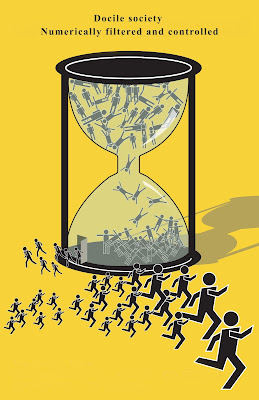 The foremost intention of the government is the management of behaviour.  Inhibiting, procuring, annulling, reversing, manipulating, controlling, or assuring the actions of the other leading to self-care, self-regulation, or, in this case, self-imposed immobility. So production must proceed to keep the country alive. The thing important about behaviour management is productivity, the benefits it brings and who benefits from them. At this point in quarantine and working from home, we are already beginning to see the growing communicating platforms such as Zoom, Cisco Webex, GoToMeeting, Google Hangouts and others, platforms facilitate meetings for offices; businesses, politicians, high school and college students.  Indicating our working habits are changing.  A microeconomy of self-enclosure is already in place: Zoomism.

In the early twentieth century, there was Taylorism; a new working method of a production technique that analysed the production workflow.  Dividing the unit of production into small, simple segments that can minimise training time and lowering of skill required in favour of highly skilled previously employed workforce.  A method correlated time performance lowering wages at the same time to produce items at lower prices.

Fordism "the eponymous manufacturing system designed to roll out standardised, low-cost cars and afford its workers decent enough wages to buy them." Mass production never had the need to look back with an efficient workforce within a happy environment.

That was to change under Japonisation or Toyotaism, which replaced Fordism, represented a profound change in work direction for the car industry.  When the ideas came to England, it brought a long overdue manufacturing method. Eventually, Birmingham, the centre of Car production in the UK, saw a turn round for British Car manufacturing.  Rise from the doldrums after the demise of British Motor Corporation, BMC in the 1970s.  Toyotaism or Japonisation is a just in time management method (JIT), a system of production limiting stockholding for the right time required as well as training along the lines of supervision and payments. It replaced Fordism, in having also established piece-rate, hourly work without compulsory social security.

This change of landscape carries a very hefty price in socio-economics terms.  The fall-out for both government and the individual is enormous, and when the tide of Coronavirus finally ebbs the cost of mitigating the damage it exposes and leaves behind will be even higher.  It is estimated thus far governments and central banks have cushioned world economy by around $15 trillion.  The costs involved in extending a lifeline at protecting jobs and keeping the economy buoyed is unprecedented, yet the downturn economists forecast is a certainty.  There is every reason to believe a downturn can carry with it social exclusion, global unemployment, widening the gap of inequalities and worsening poverty. Coming at a time, when the world was finally shaking off the debris of the economic recession of 2008. The economic stimulus needed to get the country up and running when this is over will be painful for all of us.  The UK will emerge from lockdown with high and rising public debt, disrupted supply chains, and increasing unemployment. I am no economist but thank goodness for near-zero interest rate now and for some time to come.  That would go a long way to mitigate the pain of any action the government decides on how we would have to pay for the debt, by way of taxes or otherwise.

Coming out of lockdown, blinking into the daylight of the economic disaster trying to adjust for a ‘new normal’ will prove an inexact science. Besides, there is a hefty price to pay in our relationship with others that would need adjusting.  Already two months into the lockdown the effect of social distancing and isolation many are touch starved.  No shaking hands, no kiss greetings, no sitting shoulder to shoulder.  Touching is an integral part of a human relationship, but we are denied it. A healing hand, stroke on the face, pat on the back, touching when we speak extends a friendly gesture. We have to rethink our mental attitude and make up for this loss of touch and pretend distancing does not mean avoidance.  When touch starved, we act nearness to make up for the loss.  Our body signals it can do without, it takes over, like being thirsty but there is no water, so we imagine water instead.  And, to communicate with eye contact, especially when wearing a mask doesn't say much without full facial expressions.  Our eyes need help at social interaction; to express happiness, sadness, anger, surprise, fear, and disgust.  A smile can say a thousand words in any language and breaks down barriers in any culture.

So there you have it...we are in for a bumpy ride!