The End of the Johnson Era 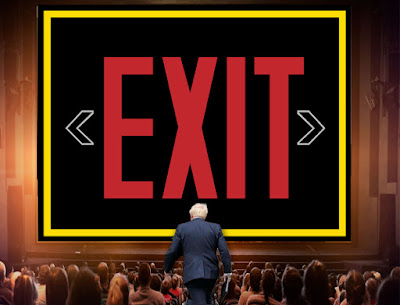 Finally, we see the back of Boris Johnson. His wish came true; he didn't want to be a one-term Prime Minister. He never was fit for Downing Street; he should've stuck to his columnist and magazine editorial jobs where he is at ease with words. His facility with words largely helped to get him through that famous glossy black door of number ten.  He ignored the anger of many of his MP's and the calls for him to resign by loyalists, he could have done so with dignity instead he leaves office in disgrace.

When campaigning for the conservative party's leadership, he had a talent for expressing a lie that made it believable. He won that contest, and not long after, defying expectation, with the same approach, he won the premiership in a landslide election victory with the highest majority since Margaret Thatcher in the 1980s. That gave him a mandate to "get Brexit done". He will go down in history as the person who got us out of Europe.

Not telling the truth was a fixation that marked his term of office. His career as a correspondent, journalist and early political position was littered with untrue statements for the sake of just saying something instead of reporting the truth. Throughout that period, he got the sack from a stream of jobs. But the strangest thing was he always had people rallying towards him. Maybe his buffoonery or just a comic-like appearance with a Chirchellian delivery had a special appeal that pulled them in. After dinner, speaking awaits most probably at £100,000 a go.

But things have changed since he won that massive majority, effectively creating a coalition of North and South of the country under the banner of levelling up. Jeremy Corbyn is no longer on the scene, Brexit has not gone to plan, and the economy is in dire straights, signifying the winning mandate has gone to shreds. That was realised early enough, so it was a matter to keep to it or concentrate on voter appeal and window dressing. Disagreement on geography spending became a simmering dispute between the Prime Minister and his then Chancellor. Hence, the direction of travel was lost, most probably at the gates of the Pandemic. Taking tough decisions was not the make-up of Boris Johnson. However, unfortunately, for replacement, we don't have much to go on. We don't have anyone with enough charisma to pull the country together.

The end came after the revelation of a series of scandals, cutting corners with the truth, chaos, parties during lockdowns, breaking his own laws and getting fined by the police, and their cover-up led to the loss of trust by both the public and his MP's. He knew nothing for one minute, and then it turned out he knew quite a bit but had forgotten. Later his memory recovers, and he apologises. And to wrap it up, now is time "to move on"—a matter of drip-drip allegations and drip-drip denials. More than anything, supporting the scandalous behaviour of one of his senior ministers was one drip too many. Finally, Rishi Sunak, his Chancellor and Sajid Javid, the Health Secretary, had enough and could no longer defend the indefensible, so they decided to resign. The former blames differences on economic policies, and the latter accuses the government of lacking integrity. Both together, losing trust in their leader, triggered the avalanche of resignations.

He has gone but not gone. He wants to stay on as caretaker Prime Minister despite the collapse of his authority and allies deserting him on all sides. That means his Presidency-like status goes on but lame until his successor is chosen despite the chorus of conservatives asking him to step down immediately. Aside from the good for the country was the good of the conservative party's reputation. To save what good is left of it. Unfortunately, however, no one in the wings to take over the party's leadership. No challenger, a serving minister or otherwise, had emerged to take over. So we are into an interregnum government of three months or so. Unless, of course, the system of choosing the next Prime Minister gets speeded up, which is likely. Many have put their hats in the ring, but at any other time, not one of the incumbents considered of material quality, let alone the premiership. But, we have to choose from what we have. Not much left in the barrel, though.

Tough decisions, to jump on one thing or another, you can not be all things to all men. But at such juxtaposition, the mind could play dirty and fuzzes the way forward; eventually, ambition for power overwhelms reason. And here we have good examples. Power corrupts, a flawed personality corrupts further and defending such a character carrying the lies forward as Nadhim Zahawi, Liz Truss and others that remained, in his inner circle, immediately put them on the spot. Moreover, the effect of supporting that same shady limelight would ruin their reputation, seriously undermining their political future. Zahawi, a 33-hour stay at number eleven, will go down in history as serving the shortest term in the role of Chancellor ever.   At last, he had the nerve to submit his resignation. But, alas, too late to save his political future.

That support was against the backdrop of Johnson's loyalists quickly having read the script jumped ship, draining away at speed.

So what is the road ahead for Britain? Whoever succeeds him or she will be greeted with a monstrous in-tray: the economy, Energy, Ukraine, Health, confusion over the Northern Ireland protocol and the overall Brexit disastrous after-effects.   The post Pandemic economic stall, worker shortage across all industries and raging war in Europe have caused Britain to have one of the lowest economic growth in the world. Are we going to see a rescue, or are we in it for the long term? A cycle of economic tensions, inflation and squeezes on household income will cause severe hardship for many.

Moreover, Britain has become unproductive as a nation, making it difficult and unaffordable to ease the pain. Welfare, ageing, health, investments and income will suffer as a consequence and will be an incredible challenge for any incoming Prime Minister. Who is up for the job is anybody's guess, but one thing is for sure, we won't see food becoming cheaper and zero interest rates will be a thing of the past.

My money is on Jeremy Hunt, the only candidate who never served in Johnson's government, but unfortunately, at the time of writing, he still has not declared to be standing for leadership. He is also a remainer, so hopefully, if he makes it, Britain will stand a good chance of getting back into Europe its rightful place. My next favourite is Rishi Sunak. I see him as the most competent person to tell it as it is. He is more conservative, advocating sound policies of spending only what you have. Tax cuts will be a dominant feature in the race; he is the man to consider how to go about that. Zahawi is a chameleon, if ever there was one. He did not jump ship in good time; his loyalty got the better of him, and he got soiled from the relationship with Johnson. Javid is focused and an excellent communicator, but his disciplinarian approach could be his downfall. Finally, Liz Truss is a latter-day Thatcherite well past her sell-by date. The present-day favourite, Ben Wallace, the Defence Secretary, has declared himself out of the race. It would be interesting to see whom he backs. His support could make a vast difference to his or her electoral fortune. There are others, but for now, I have discounted them as they also ran.

Britain needs a change in its culture of politics at the top table, and Downing Street needs to be more generous with the truth.