The Battle for Iraq 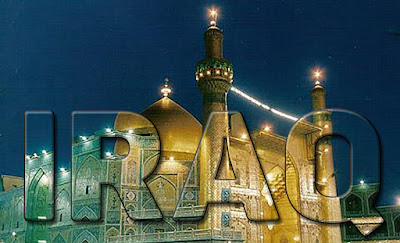 Just for distraction, today, I turn to Iraq.  With Coronavirus monopolising conversations and to a certain extent dominating our lives that may not be a bad thing.

For many Iraqi people, its politics is their second most favourite subject of conversation.  The first subject is food, of course.

Seeing Ramadan is just around the corner, I thought it an occasion to focus on where Arab Islam and its politics taking Iraq, in particular, the circular arguments it faces relating to its religious affiliation.  Bearing in mind that Iraq sits at the heart of the Middle East its political and religious convictions, could have a profound influence on all its neighbours and beyond.

I try in this essay and in the video below, take a new look at the situation and how religion is defining Iraq's political standpoints.  My other concern is who holds power in the country and to focus on the politicians' ability to lead considering the religious handicap that straps in the would-be non-conformists; a fear of ostracisation it almost invariably imposes on such occasions.  Opposition to the status quo is frowned on and could lead to a career in the wilderness.  Instead, its politics runs along sectarian lines, and the divide underscores ideas on how to practice Islam.

At the heart of the battle for Iraq sits religion, differences in the practice of it and how it intertwines with politics.  Shia and Sunni schism is mainly on theological grounds how to be a good Muslim. Disagreements circulate on which sect represents true Islam.  A difficult one! Bearing in mind that bribery and corruption demerit the faith but the elite of both colours in Iraq, so positioned in the country, are inherently prone to this weakness.  More so, both cultures run in tandem and increasingly proving just as unbending makes things even more difficult for Iraq to get ahead.

As I understand it, the modernist Sunni school of thought of True Islam is going back to the period of the first four Caliphs; Abu Bakr, Umar, Uthman, and Ali. A period later equated with western-style democracy.  A period of thirty to forty years when Islam was on the crest of a wave, powered by divine will. But a period of disputes soon followed, and Shia articulation took different roots utterly opposed to what then mainstream and orthodox ideology.  Beyond Iraq, part of the schism today mainly centred on theological grounds —firmly disagreeing with Shiite notions to placing clerics between man and God.  Modernism also entails draining the religion from a culture of theological corruption built around it over millennia that has tarnished its image.

For Shia going back to this 'Rashidoun' period and risk approval of the illegitimate first three Caliphs would be an attempt at 'sunnanisation' of Islam; fitting to Saudi Salafi fundamentalism. Such modernist approaches would be anathema to Shia traditionalists.  For the traditionalist Shia, they accept nothing less than to make Iraq an Islamic State to join in a coalition with Iran. For Sunnis to entertain such ideas is like considering joining with a Zoroastrian state. Their conviction of true Islam is the Shia's primary drive to making Iraq an Islamic state and to forever leave it outside the fold of Arab Nationalism.  Having reached this far Iran would not hesitate to invade the country if it feels a Sunni coalition might disown it of its rightful prize.

Cairo, Baghdad and Damascus a once-proud centre of Arab nationhood.  Today the latter two are being drawn away from the Sunni compass of influence, leaving Cairo on the edges. Still, with oil plenty around the world and with price bottoming out as I write, Saudi finance is on a downward slide.  In sympathy, we might yet see the Al Azhar rediscovering its Shiite roots and tip the balance. Lebanon and Yemen are already following close behind within this budding Shia Crescent.

Iranian Shia Islam at the heart of the Middle East is not far fetched. A scenario that Sunni Islam, including those of North African states, have yet to grapple with.    Seeing that fortune, power and leadership entrusted to the Sunnis for centuries by the will of God, so they believe, finally slipping away.  Today Arab Sunnism is at its political weakest. The billions of Dollars the Sunni Arab world, including Turkey, that feathered their combined approaches to proselytising has instead encouraged radicalism.  Their soft power politics has not produced the desired counter lever so effectively effervescing from Tehran.

A resort to other means.  If not religious reform, which admittedly is off the agenda, a new political approach which has to include compromise. After decades of war, exhaustion bound to set-in making concession that much easier.  Westphalia of 1648 all over again, but look where that got Europe - The Enlightenment, Knowledge and the final separation of State from Religion.  Independence, secularism and free thought are not so bad after all. Clinching medievalist Europe into the age of Reason.

In my opinion, Iraq is at ideological crossroads,. Whichever root it eventually decides to take it will pull with it the rest of the Middle East and Arab Nationalism likely to live another day.  Sitting at the heart of the Arab Muslim world with the potential of super wealth and with that comes, power and influence knocking at its doors - is a giant yet to wake up.  The flip side is that it is plagued by corruption and its ruling elite complete lack of empathy towards its citizen.  Even so, both Iran and Saudi Arabia with potent regimes, can not afford to take their eye off the ball because their ideology emanating from Mecca, Najaf and Qum are at stake. Whoever wins Iraq will prove to 1.6 billion followers that their belief and practices are unarguably projecting true Islam. After all, the battle for Iraq is just as much as it is the battle for Karbala, and Najaf, two of the holiest shrines for the Shia, as it is for the heart and soul of Islam.