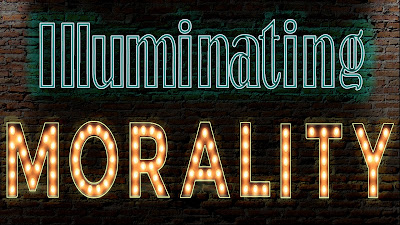 Many people easily confuse Morality with Ethics, so let us get that out of the way for starters. I will also hastily say you will not find right or wrong in this essay but it can if taken seriously enough give you food for thought as I try to shine a light on the sources for moral behaviour.  Consciously or unconsciously what are sources that would trigger our moral decisions?  What factors can go to formulate our moral action leads us to certainty, a convinced assessment, irrational or reasoned.

This chapter is a first of a two-part essay.  Next week I shall deal with the intricacies of Morality why be moral and whether morality is relative.  The changing attitudes that constitute our moral beliefs. Is it right to be judgmental?

According to the Oxford English Dictionary; it is the quality of morals or morality of a person or group of individuals’ moral principles or conduct. The definition also encapsulates moral qualities or endowments. While we are at it, Moral virtue is behaviour conforming to a moral law or accepted moral standards,  And according to OED, Ethics is a branch of knowledge dealing with systems of moral principles.

With that over, I also hope to show in this essay how we perceive feelings; altruistic or immoral that forms our ethical principles that emanate from within our inner thoughts.  It is interesting to note that our moral principles do not necessarily come from codes or book of laws. So many people acknowledge that we quarry our morality trends and formulate individual moral applications from some fixed points such as Mosaic laws etc.  Here I shall endeavour to explain this is not necessarily so since we can also instinctively excavate our right and wrong metrics from biological tributaries that are at work in our cognitive or mental impulses directing our sense to an ‘acceptable’ behaviour.

There has recently been a move away from the traditional belief of two opposing sides for the originality of Morality; biological and cultural.  For many, the cognisant of impulses accounted from a hybrid set of factors such as language which constructive cultural interferences then modifies, but such signals triggered by biological impulses towards judgment and reasoning of errors.  The likely event is that in turn, moral judgment will then influence the free will that eventually points to intentions.  Neuroscientific techniques have led to new discoveries about the functional organisation of the ‘moral brain’ and the transmission of impulses for a final moral judgment.

If we start with the premise that moral judgment is aimed at discovering moral truth, then psychology can find our senses unreliable like say faulty instrument.  The other premise is that every one of us has this intersubjective justification of knowing things to be morally right, but that can also prove defective.  This begs the question can we ever believe anything to be universally right? Well, yes, I posit that these two sound premises are not conflicting views but can run parallel. They can also contribute to one another to reach an understanding as subjective and verified true belief,  at the same time accept to establish human, and moral judgment is innate complimented from cultural factors.  As you will see below, there is another factor that directs our moral judgment such as language.  Indeed language has a significant role to play. In effect, none of these three factors works in unison but in a tripartite inclusion to arrive at an opinion.  Such is the fusion that fashions our conviction that can in extreme cases polarize or highlight disagreements, so we arrive at an almost unshakable conviction to our ‘true’ belief.

What seems to be clear at the outset there are two most important principles sources from which we extricate our moral directions.  On the one side, our moral judgments rooted in natural factors (biological) but that in all cases on appearance they are socially conditioned into a pattern of behaviour.  Additionally, since the turn of the twentieth century, psychologists have placed much less emphasis on the role of reasoning in moral judgment.  An audience were presented with a story where a brother and a sister performed acts of incest and were told beforehand; the pair went to extraordinary precautions to avoid conception.  Their moral judgments did not extend beyond “I don’t know why it’s wrong, it just is.” Such reasoning was later called ‘moral dumbfounding’ since a moral judgment arrived at spontaneously and in flashes and thinking probably would only follow much later if at all.  So this leads us to ask are moral judgments produced through conscious thought or unconscious psychological mechanisms. At the end is the belief rational is it reliable.  Yes, since spontaneous mathematical answers are no different, though correct does not mean arrived at in a rational way.  So defining spontaneity as flawed can at times be incorrect. See below where reasoned and reasonable judgments may not be reliable.

Here is a spontaneous judgment being,

‘Wrong for the Right Reason.’

Get rich quick schemes.
Most people who use email will receive message virtually every day promising huge riches for a ‘small’ capital outlay.  Because these are almost without exception frauds and it would take too much time to investigate their credentials one by one, the only rational course of action is to ignore them all.  However, that means it is possible that one day you will ignore a genuine opportunity and forgo great wealth.  That particular email would not be a fraud, yet in an important sense, you would still have reasoned correctly when you concluded it probably was.

And very briefly; moral judgments can also be affected when hungry or following a hearty meal, by the phrasing of questions, by the environment such as cleanliness and comfort of the surroundings. A likely wrong or biased decision made where the floor is littered with empty pizza boxes or if you have been drinking or expressing attitudes following an enjoyable movie or a day out. Moral orientation goes into overdrive when say going into a courtroom feeling vulnerable at a plaintiff’s attempt to chisel away some of your millions your biggest hope is for the judge to come back from an enjoyable lunch preferably downed with a glass of wine.  Interestingly, your cognitive impulses would instinctively direct your moral judgment towards an appeal to his moral bias.

Some popular line of thoughts among Scientists and Psychologists that nearly all human morality is embedded in evolutionary biological factors of human nature. Recent experiments made on the cognitive responses of babies before application of language suggests there is strong correlation towards behaviour at a very early age:

The babies, seated on their parents’ laps, watched a puppet show in which a character trying to climb a hill was helped up by one puppet, but pushed back down by another puppet. Offered the opportunity to reach out and grasp one of the two puppets, babies showed a preference for the helping puppet over the hindering puppet.

Of course, this is a long way from a full proof experiment, but at the outset, it seems to suggest how human morality comes about; it builds upon innate preferences for pro-social behaviour.
In the cases of adults where the minds of human adults lead to display an evolutionary specialisation for moral judgment that compels most people to make persistent and predictable mistakes in evaluating abstract inferences. What this means is people’s natural tendency to perform much better judgments when applied to social norms rather than evaluating linkage between numbers and colours.

For instance, rather than being asked to assess an abstract rule linking numbers and colours, people have been invited to evaluate a rule prohibiting those below a certain age from consuming alcohol. Participants in these studies made the common mistakes when looking for violations of abstract rules, but made fewer errors in detecting violations of social rules.

This experiment would suggest that moral judgment evolved as a domain-specific capacity, either Abstract or Social, rather than as an application of domain-general reasoning- a broad brush application. Preferences are dependent on the cultural uptake and where reasoning is either deemed less important or is a later addition.  If this is right, then there must be at least an innate (Biological) core to moral judgments.  This category also embraces causing harm, sharing benefits, resources, and respect for authority, etc.  This phenomenon also marked by regional geographical differences that can significantly affect judgments.  A prime example is where people from Eastern and Western hemisphere can differ in their views by engaging or prioritising one over the other.

However, it is believed whatever brings the two principles Biological and Cultural together to mutate into judgment is language.  According to Noam Chomsky’s (1965) generative linguistics, “the capacity for language production […] functioning grammar is innate, but the enormous diversity of human languages comes about through myriad cultural settings and pruning within the evolutionarily allowed range of possible grammars.” In other words, the capacity of making moral judgments is within the grammar used in a particular language, but depending on the diversity of cultural presence it colours the decision to produce distinct local morality.

We also find that moral judgment is more a matter of emotion and affective intuition than deliberate reasoning.  For many, this means people decide without going through any reasoned or rational judgment in balancing a thought but appearing suddenly and effortlessly in consciousness that can take the form of an unshakable bond yet remain without foundation.  In such cases, there is never need to reorganise the mind to least searching, weighing evidence, or inferring a conclusion to confirm or deny their first line of thought.

The conditioning exposes the bias in our thinking and opinions obviously unable or unwilling to accept the presence of such biases. Our honest thoughts right or wrong drives our ethical principles and rational thinking hardly ever get a look-in.

I leave you with this:
When no one wins

Private Sacks was about to do a terrible thing.  He had been ordered to first rape and then murder the prisoner, whom he knew to be no more than an innocent civilian from the wrong ethnic background.  There was no doubt in his mind that this would be a gross injustice – a war crime, in fact.

Yet quickly thinking it over he felt he had no choice but to go ahead.  If he obeyed the order, he would make the ordeal as bearable as possible for the victim, making sure she suffered no more than was necessary.  If he did not obey the order, he himself would be shot and the prisoner would still be violated and killed, but probably more violently.  It was better for everyone if he went ahead.

His reasoning seemed clear enough, but of course it gave him no peace of mind.  How could it be that he was both going to do the best he could in the circumstances and also a terrible wrong?