Iraq, One Nation One State 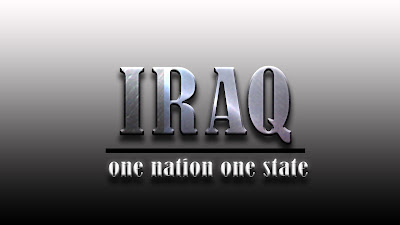 Let us try to define what a Nation is.  From the many definitions, I have come across this is the best: "a human group willing to forming a community, sharing a common culture, attached to a clearly demarcated territory, having a shared past and a common project for the future and claiming the right to rule itself'. I also add; with enough determination for self-determination for the right to State sovereignty.  So awareness, territory, history, culture, language and religion all matter in my reckoning. Aside from the Pluralistic religious beliefs that existed in Iraq that definition is well suited with the construct assigned to those people inside lines drawn on the map by François Georges-Picot and Mark Sykes when they divided the Ottoman territories at the turn of the 20th century. The three million people of Iraq were to be identified as such because they happen to live within these lines assigned to them.  Literally, at the stroke of a pen, forefathers of present-day people of Iraq acquired a history, they became the distant relatives of people of great learning who lived thousands of years ago. They gained a new identity they became the inheritors of Babylon, one of the greatest civilisation of the Ancient world.   That was a hundred years ago. However, a vital question needs to be answered: what qualities the descendants were supposed to possess to authorise them to look after such a privilege and to live up to the responsibility to regain the glory of their newly assigned ancient past.

The gates of Babylon opened for Alexander the Great, riding his royal chariot.  In around 330 BC,  he was to become the heir to the King of Babylon, which marked the first and most crucial step in his progress to becoming the wealthiest man in the world.  Babylon and its farmlands, its fertile crescent could feed the prodigalities of Kings.  The City itself was a treasure trove, a reward of unimagined value.    A moment of glory so momentous that it surpassed any of his victories.  For two centuries earlier it was the Capital of the unjust and ungodly Persian empire, its masters, which had robbed it of its riches only used it as a source of slaves, Eunuchs and concubines.  Alexander, under his authority, restored the old temples, back to the glory days of its founder Nebuchadnezzar, made it shine like a jewel with gilded Lebanon cedar and cover the floors of the temple and the Ishtar Gates with inlaid red gold.

What went wrong? I don't believe that anything went wrong, but those Iraq forefathers had the wrong makeup and were distinctively different not merited to be assigned a nation of such magnitude.  The British Authorities holders of the mandate at the time were out of their depth how to go about building a country of a multiplicity of diverse people.  Although the population shared an Arab cultural background but were made up of various ethnic origins, different religions splintered across confessional lines and a plethora of social customs that were not likely to blend in any readily identifiable form or into any cohesive community.  State building was a more comfortable option; hoped to be the catalyst that will eventually pull people together.   Iraq as a new manufactured country with its new fancy zigzagged lines may have won its people a Nationality but lost them their Nation. The inhabitants had a Nation without a State but ended up with a State without a Nation.

Unfortunately, even after the 1932 independence of Iraq, nation-building was elusive and placed on the back burner, and to this day Iraq is a State without a Nation.  Worse, the new generation has not fared any better.  A Nation living in such as none-State would lack legitimacy cease to be worthy of self-determination.  Nationalism, the most potent principle of political legitimacy in the modern world, coming together when the Nation is collectively and freely institutionally express their willingness to be ruled by its co-nationals.  Without such fires of Nationalism efforts to integrate into a melting pot of a multi-racial and multi-ethnic state would be futile and as such this has characterised and blighted the history of Iraq for the last hundred years.  Iraq has ended up in double trouble; power relations between 'racialised ethnicities' and 'ethnicised races.'

To give some credence to this tongue twister, people of Iraq have become acculturated to the values, norms and language towards accepting a cultural pluralism in their midst.  Some of whom structurally identify with a dominant society in an Arabised form within their particular ethnicity. A rather complicated set of values easily and instinctively go to undermine efforts of reaching out to socio-political cohesiveness and cultural pluralism.  As if inherently resisting the temptations to belong, to stand at odds with the cultural status quo.  While others, misjudging race with ethnicity and despite their generational legacy of Arab language and culture refuse to call themselves Arabs.

Streaming of Nationalism means that at some stage, ethnic groups would eventually assimilate, however, this does not mean that the new identity is a melting pot that belongs to a homogenous Iraqi cultural identity.  Groups lose their language and customs, but ethnicity continues to be recreated in a new form of identification that is neither a melting pot nor a simple repetition of their communities of origin's ethnicity.  Once assimilated the residual of the original culture identity eradicated as well as any discriminatory obstacles that could affect their successful incorporation. Ethnicity continues but in a new form of identity groups that emerges out of shared political interests.  They become interested groups that deliver political power which eventually translates into economic gains leading to upward mobility for the whole community.

Unlike, say the Kurds, Christians were faced with religious discriminatory experiences obstacles that have a marked effect on cultural integration into the political mainstream. The identity of a group become religionised.  Names are giveaway identities. People are subjected to the State-centric discriminatory influences, conditioning attitudes that invariably must institutionalise cultured societal dissimilation.   As a group of different ethnic backgrounds, Iraqi people are no longer racialised but draw their identity from their structural ethnic dynamics in building the framework to their cultural belonging. A socio-political mode of incorporation hitherto governed by discriminatory institutional barriers by any one dominant group be they Sunni or Shia.  It is, therefore, a question for the government to interfere not so much of a nanny state but, to some degree, regulate citizen education, language, culture, sport, travel and so on, and by so doing they establish and reinforce some 'national' attributes and discourage others.  Nation-building must go hand in hand with State building working towards an ideology of NationalismNationalism rather than be shoehorning towards it.

Nationalism in patriotic form obscures religion pushing it back to secondary status to the point it becomes a redundant principle of a stable and legitimate political order and to challenge archaic traditionalist conservatism.   I further add that Nationalism is the sine qua non in establishing legitimate political order ahead of Law, Reason, Utility, material prosperity and social justice all relegated to secondary principles.  Nationalism would finally wipe away influences of the primordial tribal orders. The Nation of Iraq becomes for many the substantive and ultimate value to which all political and ethical actions remain subordinate.

States bent on extinguishing smouldering flames of ethnic enmity without the drastic surgery of secession or confederacy need to ensure the citizens of Iraq to live free from foreign influences or domination.  To implement principles of self-determination before any ideas that are territorial in character but more social in scope. Prioritising a roadmap for unions between its peoples, as well as an approach to issues of national identity and rights that differentiate between nationality and state citizenship. A states-plus-nations framework dampens enthusiasm for territorial compromises; it widens the menu of options when secession changes may not be in the best interest or when they are altogether ruled out.

If the May 2018 polling comes to mean anything, it needs to fuse the ethnic divide that still overrules the national identity.  There is, a tangible new sense of Iraqi nationalism creeping in and there are signs of a decisive shift away from the corrosive ethnosectarian voting. Sharing of culture goes beyond ideological barriers; religious and instinctive undertaking only to bond with the fellow religionist.  Instead, the new generation should be the nation builders collectively solidifying bondage and kinship through the history they have in common.  The Babylonians were their ancestors even though there is a strong element of exogenous variables such as outside ethnicity the endogenous ethnicity cannot be denied a place.


Maps have proved to be a vital part of 'imagining' a nation, in quite a literal sense, creating a visual 'image' of a nation as a state. Nation-builders know this fact all too well, but they need to develop inside the borders the social contract to bypass the traditional bipartisan and religious prejudices and not to get stuck in orthodoxies which increasingly look out of date.  Essentially to allow for a centripetal ingredient to stand in opposition to the marginalising centrifugal forces that try to undermine the nature of the social weave within the fabric of a nation.  Iraq has had more than its fair share of killing and destruction; the name has become synonymous with, violence and all kinds of atrocities and no longer lures loyalty, an empathy much soiled by self-inflicted dishonour. Colonialism left Iraq a nation divided, so it has remained an inorganic entity with its people void of kinship beyond family ties or religious affiliations.  A dire need for a new culture a new sociological layering to heal fragments that exist among its religious diversities.  To grasp at Nationalism by a rebirth of the past to establish citizenship in a search for a National Identity and self-determination.  The historical greatness of Babylon is never in doubt, such a pedigree needs to vouchsafe this legitimacy in the lineage Iraqi people inherited to continue this honourable line of descent and to recapture the greatness, after all, the people of Iraq are appointees to a great sovereign Nation.
Posted by OUFI at 09:38