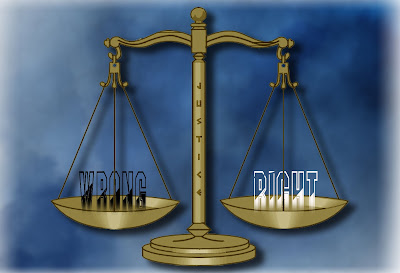 Doing right for the wrong reason or doing wrong for the right reason.

This is the second part of an essay on Illuminating Morality a continuation of part one from last week which said that Cultural inferences, Biological or innate part of our human nature, as well as language, combined determine our moral decisions.  More often than not, rationality or reason hardly influences our moral decisions putting them on the second tier of cognitive reasoning. With that in mind, I here argue, taking one of the three, that Cultural conditioning is the mainspring for our moral decisions gives us the ability merely observe to pass judgment.  This, incidentally, contradicts what many believe the potential to observe without judgment is one of the highest forms of intellectualism.

Still, having gone on the side of Cultural conditioning as the primary source for our moral induction, we are immediately confronted by the notion of relativity which I shall examine in this essay.  Relativist, believe that conflicting moral beliefs can both be true. The staunch socialist and righteous Conservative are both equally right; they just occupy different moral worldviews. Both, take into account a comprehensive view of the adamant conviction that each is correct and that the conversation partner is mistaken where both assume the other is making the blunder.

Such moral misconception mostly embedded in the positive illusion that makes us take the moral high ground to what makes us think we are special and right.  We convince ourselves that we know we have authority to tell others they are wrong. That we are juster and more knowing and we are even better drivers and better at making sandwiches or other trivia.  A flourishing dogmatism oblivious to alternative facts or considerations but merely backed by an unshakable conviction of being right is the only presupposition grounding our moral justification.  Balancing a vainglorious self-righteous conviction carries their emotional statements simply based on culturally induced preferences  A conclusion based on the rather flimsy belief that if we were all acutely aware of the totality of consequences and implications, as he or she sees them, we would not be in disagreement about moral objections.

The decision as to whether drug consumption or prostitution is inherently malignant or such matters as abortion, euthanasia, gun control, same-sex unions, pornography, all differ in value conflicts and entails decisions about  ‘right’ or ‘wrong’ taken irrespective whether our values we attach to them are valid. Many rest their judgment on all the above on the firm belief of right or wrong on emotive impulses.  They are ‘just not right’ or ‘just wrong’.  Many of us often fail to distinguish between value judgment and a moral or emotional expression.

David Hume, prominent Scottish Eighteenth century thinker, supports a ‘Passivist’ view.  This is “beliefs are established for us by the state of affairs around us and only by that;  we have no input into that belief.” What you observe then you believe in what you observe. No need for rationality but conditioning that induces you towards that belief.  “Reason is always a slave to the passions.”  Whereas Rene Descartes, a French philosopher expressed an ‘Activist’ view where belief is an intersubjective understanding derived from reason. As you may have gathered, I lean on the ‘Passivist’ view.

Our attitude to morals dramatically changes over a period.  What society accepts today it did not accept 300 years ago and vice versa.  This variation spans time as well as regions.  Take cannibalism, a practice, Anthropologists tell us, was widespread in many parts of the world surprisingly in over 34% of cultures at one time or another. Take blood sports when in Roman society human being killing each other was fun to see considered pleasurable pastime. Rather similar to bull killing (fighting) in Spain today.   Head hunting a culture among Celts warriors, the ancient Britons decapitating and hanging the heads of their enemies over the neck of their horses, and until the eighteenth century in Benin City near River Niger in what is now Nigeria, the collection of skulls and human sacrifice was part of life.  Or, even the painful footbinding of young girls in China, a culture that lasted for 1,000 years.  Variation in attitudes towards violence is paralleled by variation in attitudes towards sex and marriage. Arranged marriage is also common, and some cultures marry off girls while they are still pubescent or even younger. In parts of Ethiopia, half the girls are married before their 15th birthday. It is morally wrong to deny others what we do not accept as we will not accept to deny us what we think is right.  One reason being who is to say that our contemporary outlook on marriage change to run along Ethiopian line in the future and look back at our culture as regressive and ‘uncivilised’.  Also, with such dominating attitude, we are in danger of smugly supposing superiority. Each culture assumes it is in possession of the moral truth. The practice of sending elderly relatives to nursing homes is considered wrong by one and right by another culture.

There is another argument that suggests cultural inferences caused by variations in circumstance and the need to adapt to the environment otherwise people everywhere agree on similar values.  For example slave owners natural tendency to believe that slaves were intellectually inferior. Or, for Inuits, because life was hard and constant shortage of food they practised infanticide.   Such arguments would also seem to suggest it is right to enslave those with low IQ’s and it is right to kill off impoverished children.  But it is spectacularly implausible that all moral differences can be explained this way. Differences in circumstances do not show that people share values; rather, they help to explain why values end up being so different.  When societies converge morally is usually because one has dominated the other, as with the missionary campaigns to end cannibalism.

In conclusion, moral judgment is an emotive reaction, conditioned and osmotic devoid of the reason for its reaction.  Reason is only reactionary to bring attention to value- value judgment as opposed to emotive judgment.  ‘Don’t do this’ has a greater resonance that ‘do this’ a child had already internalised a moral value since parents correct antisocial behaviours for example; spanking, withdrawing love, ‘go to your room’, to experience a negative emotion to learn.  Reasoning with children on what is a moral value so often fail since by definition all moral responses are emotional attitudes. Some of us within seconds go from having no idea what something is, to developing strong feelings about it, to being outraged when anyone disagrees.  What makes us feel bad must also be wrong.  Is that right?

I leave you with this thought experiment:

Bank error in your favour

When he got home, he checked his account online and found that, sure enough, his account had been debited by only £100.  He put the money in a safe place, fully expecting the bank swiftly to spot the mistake and ask for it back. But the weeks passed, and nobody called.

After two months, Richard concluded that on one was going to ask for the money.  So he headed off to the BMW dealership with the hefty down-payment in his pocket.

On the way, however, he did feel a twinge of guilt.  Wasn’t this stealing? He quickly managed to convince himself it was no such thing.  He had not deliberately taken the money, it had just been given to him.  And he hadn’t taken it from anyone else, so no one had been robbed.  As for the bank, this was a drop in the ocean for them, and anyway, they would be insured against such eventualities.  And it was their fault they had lost the money – they should have had safer systems.  No, this wasn’t theft.  It was just the biggest stroke of luck he had ever had.

Are people naturally immoral? What if it was not a bank but another human being? Are we judging by a peculiar sense of justice?

The reason why Richard was so easily persuaded by his own argument, he is prone to self-serving bias in his thinking.  It is very difficult to disable this bias and think impartially, after all, why should I?