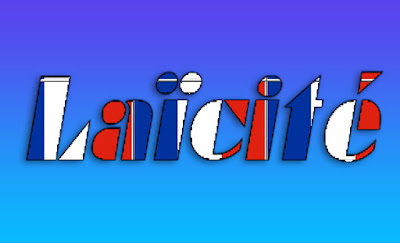 The years 1789 to 1794 was the epoch-making five years that were to form the turning point of the French Revolution. The Third Estate went to build the French Nation as a body of equal people living under common law. From it sprang the Declaration Rights of Man that went on to underscore Liberté, égalité, fraternité.

Despite the heading, this post is not about religion. However, but it runs through it. It is about social conformity and Law of Secularism in France. It was written initially with controversies in mind at the time surrounding modes of dressing by some Muslim women on beaches at a time when Bourkini was being worn. That summer four years ago, some Mayors in South of France banned the wearing of Burkini on their beaches. Today it can equally make sense in the light of the raging argument about Cartoons on the prophet Mohamed and the beheading of History teacher Samuel Patti.

This updated post also tries to make further sense of:

b) Provocative display of religious symbols.

C) Laïcité is not coercive or restrictive.

According to Wikipedia Laïcité, is the absence of religious involvement in government affairs, especially the prohibition of religious influence in the determination of state policies. According to Oxford Reference, Laïcité exists in varying forms depending on the level of impact of religion and religious beliefs stipulated by government guiding principles: politics, law, in public life.

In some countries, such as France, there is a complete separation of religion from state affairs (a form of secularism known as Laïcité). Demonstrating, amongst other things, to limit if not issue an outright ban on the wearing of conspicuous religious symbols in public and in government institutions such as schools. It does not prevent or prohibit people's right to freedom of religion and belief.

Secular states have two key features: 1) their legal and judicial processes are outside institutional religious control. And 2) they constitutionally establish neither an official religion nor atheism.

Laïcité is non-restrictive to free-thinking individuals to engage in freedom of speech, freedom of thought and freedom of worship.

The stress is on égalité where the Equality of all is to establish a simple citizen on equal terms to all other citizens, devoid of ethnic, religious or other particularities. Citizen, in the context of the French Revolution, is the key that abolishes patriarchal and hierarchical constructs of Society of Orders.

It is generally asserted that French secularism secures freedom of thought and freedom of religion. This sits in contrast to popular belief among Muslim radicals who argue that Laïcité is coercive and is an infringement on the right of the individual. It implies a subtle form of anti-clericalism and inhibits religious expressions. Rather than promoting freedom of religion, some Muslims perceive, it prevents the believer from observing his or her spiritual aspirations.

Personally, I strongly refute this argument. Since Liberté, égalité, fraternité covers all aspects of life. France embedded all three in its constitution and is continuously aware not to include religion in public by its institutions. This for a Catholic country makes it doubly hard for its government be always at the ready to distance itself from Religious exhibitionism. Let alone use its religious affinity as a PR emblem or a tool as if in a popularity contest as some Muslim leaders in their countries allow Islam for such use.

Moreover, the law of Laïcité is also active in the protection of minority rights. It is supportive in the funding of religious institutions irrespective of denomination. It restricts government and institutions from any would-be prejudice against any one's religion. At the same time, it tries to minimise the chances of radicalisation.

It restricts government and institutions from any would-be prejudice against any one's religion. It makes an effort to contain the radicalisation of Islam, and the law acts as a deterrent by extending its reach to include an excessive show of religious emblems. It is on the sidelines, as in a conscientious objector, there guard against religious authorities which tries to dominate the state and to extinguish any outward sign that can lead to that.

People do argue that France does allow principles of Laïcité to be contradicted in real life. A Nun, should not be in her formal dress in public, certainly not dressed in her habit on a beach. In defence, the Catholic Church stipulates a Nun must make her presence visible in everyday life. A Habit is just as much as an Islamic Imam is identified by his mode of dress in public. And, is irrespective whether or not a Nun is allowed on the Beach as in Nice, France.

In France, the culture of the Republic is embedded in the Laws of Laïcité. It is increasingly sensitive to the language of signs and symbols that bear witness identifying them belonging to a particular religion. That is a necessary part of being French. The Islamic hijab, Sikh turban, (large) Christian crosses, and Jewish Stars of David and kippah are banned from public schools. Such a ban came into effect in France in 2004. Moreover despite many consider France a Christian country the law also prohibited the broadcasts of Catholic and Orthodox Christmas night liturgies.

There is also the question of identity. The outward appearance of distinctive clothing bracketing a specific individual to a religious denomination could be interpreted as a political statement. It carries ideas for self-distancing, more engrossed with identity formation. It signifies the distinction between Equality of an individual in society as opposed to a difference of that individual. Showing outward signs of failure to integrate into the broader community.

Additionally, it indicates negligence on the part of the person to benefit from standard discourses of Enlightenment values to 'find themselves', without prejudice to the universal norm. To opt-out to a concept of self-distancing while unconsciously allowing separation, delimitation, and spatial partition is contrary to what being French is about. Identity of an individual is reserved for free-thinking. On the contrary, the inhibition of individuality is frowned on so society can enjoy the freedom of thought and freedom of expression. Both are given free cultural rein to enrich the values of one and all.

The practice of religion in a democratic country like France need to run alongside its laws and regulation. Therefore freedom of religion is just as strong as freedom of speech both protected in equal measure. It can never be the other way round but for State and Religion to remain sperate. Otherwise, it would turn upside down to what the French Republic stands for. The very idea of such a thing would contradict and undermine the very essence of The Rights of Man- the backbone of the Republic. Islamic righteousness is acceptable where its home is and only in a private capacity in France. Laïcité is therefore there to give substance and collective meaning to Liberté, égalité, fraternité.

Clause 4 of the ‘Rights of Man’ states: Liberty consists in being able to do whatever doesn’t harm another.  Thus, the exercise of each man’s natural rights has no limits other than those which guarantee to the other members of society the enjoyment of these same rights; those limits can only be determined by the law.