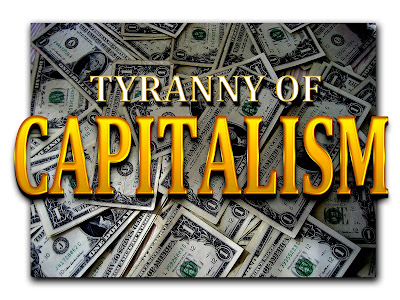 “Capitalism needs neither propaganda nor apostles. Its achievements speak for themselves. Capitalism delivers the goods.” -Ludwig von Mises.g

“If there were a nation of gods, it would govern itself democratically. A government so perfect is not suited to men.” Jean-Jacques Rousseau, The Social Contract, 1762

This article will take on itself the difficult task to examine the ominous tempest currently sweeping across the Western world leaving a virulent social anger in its wake.  Class differentials marked by gaping divide of social interaction between the poor who are becoming poorer and the rich 1% who are experiencing a meteoric rise in wealth.  In the United States for instance "Including capital gains, the share of national income going to the richest 1% of Americans has doubled since 1980, from 10% to 20%, roughly where it was a century ago. Even more striking, the share going to the top 0.01%—some 16,000 families with an average income of $24m—has quadrupled, from just over 1% to almost 5%".  This phenomenon not confined to the US but similar trends also in Britain, Canada, China and India. Here, I examine some of the reasons for a one-sided concentration of income: a core reason for political dissatisfaction rapidly developed fault line in inequality especially striking since the 2008/9 recession, and point to those who are brave enough to recognise this paradigm shift how they aim to achieve a more egalitarian society.  This change together with globalisation has drawn to itself the current recoiling to national borders, rejection of foreign imported labour, and building real and metaphoric walls to secure people's cossetted and traditional grounding they perceive to exist still.

Class conflict is no stranger to this side of the world clearly recognisable by the ever present ‘Society of Orders’ that prevailed in Europe until the first two decades of the twentieth century.  There has been many uprisings, revolts and revolutions to mark such events and one notorious that struck at the heart of European Elite was 1848, a month of revolutions and industrialisation. The mere grievance was to get a decent wage for an honest day’s work. Though the revolts at the time did not achieve much, they later proved to be the spring well for social reforms in Bismarck’s Germany, Tsarist Russia and of course in Britain and France.   Throughout the 'Gilded Age' of the Second half of the 19th century through to the second half of the Twentieth, despite gallant efforts by governments to fiscal reforms, interwar society was marked by deep social fault lines: egalitarian notions were still in slumber. Social welfare was mostly inadequate falling far short in its care of the elderly, disadvantaged and those fought for King and country.  That was all to change post-1945.   It was time for the government to recognise and payback the individual a belief that government should advance the common good became widely accepted.  Civil and human rights were taking centre stage; forces were in evidence working on behalf of the people’s security allaying fears of vulnerability.  The individual and society have finally arrived and ever since education and entrepreneurial spirit and other redeeming forces slowly eroded ‘Socialism’ from being synonymous to class conflict on both sides of the Atlantic.   Billionaire George Soros addresses the pejorative use of the term by the conservative right by stating, "Speaking as a person who would be most hurt by this, I think my fellow hedge fund managers call this class warfare because they don't like to pay more taxes."

The recent experience of voting trends in the UK and the United States demonstrated a bottom-up awareness towards a need for organising political structure and an appeal to reform the economic scene.  A cautious tale of two halves is building up in a country famous for its interacting with its people and in the UK the welfare system instituted at the beginning of the second half of the last century is a prime testimony.  Need for a cautious realignment of the Reaganite and Thatcherite neo-liberal policies and to clip back the free for all notions of free markets and reinstitute a degree of state control.  In effect, it is for the government to re-establish its role as conscious observer and ethical policymaker acting on behalf of individuals kerbing greed and apply an alert moral view to competitive capitalism to reconcile with those who feel alienated.    To release the handcuffs that can inadvertently stifle the economy that has so often in the past brought economic unrests.

Theresa May was the first to recognise this discrepancy in her first speech after becoming Britain's Prime Minister emphasising Social Justice to be the principal theme of her one Nation Government.  Her ideas of a union were not only about the United Kingdom but to encapsulate “all of our citizens, every one of us, whoever we are and wherever we’re from.”  As a government “We will do everything we can to give you more control over your lives.”  In her determined effort towards equality and sapping control from the Elite, she went on “we’ll listen not to the mighty but to you. When it comes to taxes, we’ll prioritise not the wealthy, but you […] Britain a country that works not for a privileged few, but for everyone of us.”

There is another side of the argument that says the wealthiest shoulder the most for moving the economy forward.  On BBC’s ‘Daily Politics’"The people who have shouldered the greatest responsibility to get the economy back on its feet are the wealthiest". Somehow I doubt whether John Maynard Keynes would have agreed see first quote above. Whether such perverse statements could ever reconcile with reality is hard to imagine but could be flippant rhetoric protecting a brittle carapace rather than admitting the obvious.  Moreover, Sir Philip Green BHS story belies this argument as do those allegedly dodging UK corporation tax such as Google, Starbucks, Amazon, etc.  For many of the hardworking population these cornucopias of riches, among this wailing and fury do not bode well and for blanketing over their responsibilities is an unacceptable face of Capitalism especially in the face of an emerging new society that demands transparency and calling out for fairness. It is worthwhile to realise Gallup World Poll data provide new evidence that all along the national income scale, life satisfaction rises with average earnings level and vice versa.

Indeed from all recent accounts, we need to realise we are in the throes of change, a paradigm shift of major proportions.  Unresolved Political dissonance is growing ever more incongruous; disparities is proving to be one of the biggest social, economic and political challenges of our time. The latest victories in the US, the Brexit vote in the UK shows the masses are increasingly vulnerable easily exploited by a subtle "the will to power" (Nietzsche), political entrepreneurs stirring up the emotions.  Visible signs of disenchantment against the establishment, the 'Gatekeepers' and the ruling elite is a continued theme on social media.  Populists are also filling the gap between the political right and left on emotional grounds.  Many struggling Europeans are angry for similar reasons outlined but increasingly see refuge in the rhetoric of racial and cultural nationalism passing for patriotism while the populist demagoguery does much for exciting the traditionalists fearful of demographic changes.

The tyranny of capitalism has undoubtedly left some people behind while many others feel marginalised.  Also, the government thus far has intentionally or otherwise misread or mishandled the appropriate tools in dealing with those underprivileged or creating enough opportunities for young and enthusiastic sections of our society to thrive.  The young forced against the bulwark of rising property prices and rising rents and the lowering of incentives for working long hours.  The chase for greater profits has circumscribed employment regulation and where Laws enacted they have failed to kerb avaricious companies in fencing off unethical capitalistic approaches. Poverty and those failed members of our society have grown in unprecedented numbers and due to convoluted council regulations has seen marked escalation in homelessness- the forgotten few.  A new breed has evolved from among those suffering such destitutions, and the many en mass supporters who have grown angry are voting against the establishment and balloting to reverse this chain of events.  The Elite and the establishment are held to blame for this divergence. An incoming tide of income disparity enough to suggest a polarising of society from the haves and the have not from the wealthy and the underprivileged- a class differential measured by a widening and an unacceptable concept of inequality.

An economic system that allows for Capitalism unchained, without government orchestration will only add weight to public resentment of "the politicians are all lying to us anyway," Compromise and empathy ought to be the imperative in the business of making money.  A dire need to prescribe to that ethos when evaluating the value of Profit since it is morally unjustifiable to accept that accumulation of wealth is an end itself.  However, I hasten to add; this piece is not meant to be a stain on the free market but creating wealth must also build opportunities, a change of mechanism, where possible in a joint effort with the government to deliver the change that people want. Capitalism needs to share in the wealth it creates, responsibility and the drive for prosperity also mean to give out a share to those with limited opportunities eliminating reasons for a possible backlash.   A free market must also be a means to spread opportunities, protect democracy and help to stem the tide of stagnation in people standard of living and allowing Capitalism to speak for itself by working for the whole country.

"Always recognise that human individuals are ends, and do not use them as means to your end."
Immanuel Kant

For more on this:
https://www.facebook.com/TheresaMayOfficial/
Theresa May speaking up in Parliament.

Also this comment from Mark Carney, Governor of the Bank of England who agrees on the issue of Capitalism and the widening gap between the wealthy and poor.
http://www.bbc.co.uk/news/business-38210169